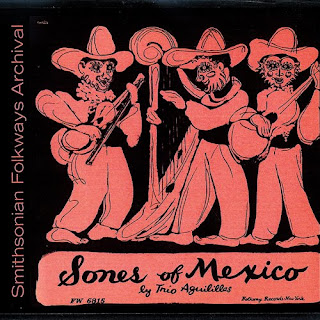 Trio Aguilillas was made up of three brothers: Antonio, Pedro and Juan Rivera born in the town of Aguililla, Michoacán where they took the name of the group. His family was peasants and his father Pedro Rivera, was a harpist and musician very prominent in the state of Michoacán. It was Don Pedro who instilled in them a taste for music and developed them from an early age to become the best exponents of regional music of his time.

After being highly recognized in the so-called “hot land” region, they arrived in Mexico City in the 40’s not only to try to continue their artistic career in the capital, but also with the objective of making known the beauty of the sounds of the hot earth, which were then practically unknown outside of their region of origin.
Initially they were rejected many times because their music was not known, so they had to learn to play the huastec sonos, boleros, corridos and rancheras songs that were in fashion. In this way they managed to enter the famous XEQ radio station and only after a year, when he had already achieved prestige and contracts in nightclubs and theaters, they were able to start playing sonos michoacanos, one in each program.
Five years later, his music was known and acclaimed throughout the country, thanks to his performances at the XEQ. Don Pedro went to the capital with his children, installing a hairdresser near the apartment where they lived and only occasionally took the violin and the harp to play with their children.

View all posts by Petty Vendetta →

Get notified of our upcoming releases

Sell music on Amazon at ReverbNation.com